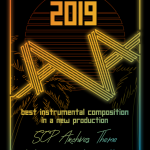 I have been nominated for a few of my compositions over the years for the Audio Verse Awards all the way back from 2016 till now. All previous years I was able to get to the finals with my Small Town horror, Kings Prerogative, Aftershocks and Ivory Towers themes.  I have to say I was quite happy with just getting to the finals that although still feeling a slight initial disappointed. The last Audio Verse Awards I was nominated for 2 pieces of music my themes for The Cellar and SCP Archives. A few months ago I felt certain I would not win due to the huge number of nominees and abundance of talent I saw as my eyes glanced over the ever growing list of nominees. Over the course of the past few weeks It became a very stressful time with people close to me going in for operations and my sleeping pattern going into dissary. The Audio Verse Awards were pushed out of my brain for quite a while until a few days before they were announced and I was like “oh yes I forgot about that.

On the day of awards I was watching the brand new Doctor Who episode and once it had finished I was curious to see who had won and had saw a few different categories had been announced already. I noticed I had a great number of notifications on my twitter and thought this was very strange I heard a ping on facebook as i clicked these notifications and received a congratulations from someone. I could not believe it I had won for my SCP Archives Theme music. I have never felt popular in all my life but out of thousands of voters to know tons of people had voted for me was surprising and pleasing. It was good after the years of been doubted by people and the struggle of having multiple disabilities which impact my life and being a gay composer that people voted for me felt like some kind of victory.

It was also good to see wins by fellow audio drama friends such as Sarah Goulding, Fiona Thraille and Tanja Milojevic. Also win awards to.
do check out their websites below

It is important to remember if you didn’t win more people now will be aware of you and the shows you have worked on and I hope it brings new listeners, followers and support to your show. We all show free support to each other by liking, sharing, comments and suggested the stuff we work on to others. And the great thing about the technology and these sites as that most of these only take seconds. Go out there and support your mates or families work whether they are a director, actor, composer, painter whatever it may be. There is very little money floating around for creative people unless your one of the top dogs in hollywood so lets spread some love and support to each other.

Back in 2010 when I did my diploma we had a tick sheet given to us by the tutors and we simply ticked off certain things we had done. One of those things was ad we ever had a track on the radio, i END_OF_DOCUMENT_TOKEN_TO_BE_REPLACED

Now I want to be quite clear on this as many people mistake jealous for envy so lets be clear on which each one means before we go any further. Envy Wanting what someone else has and resenting them END_OF_DOCUMENT_TOKEN_TO_BE_REPLACED